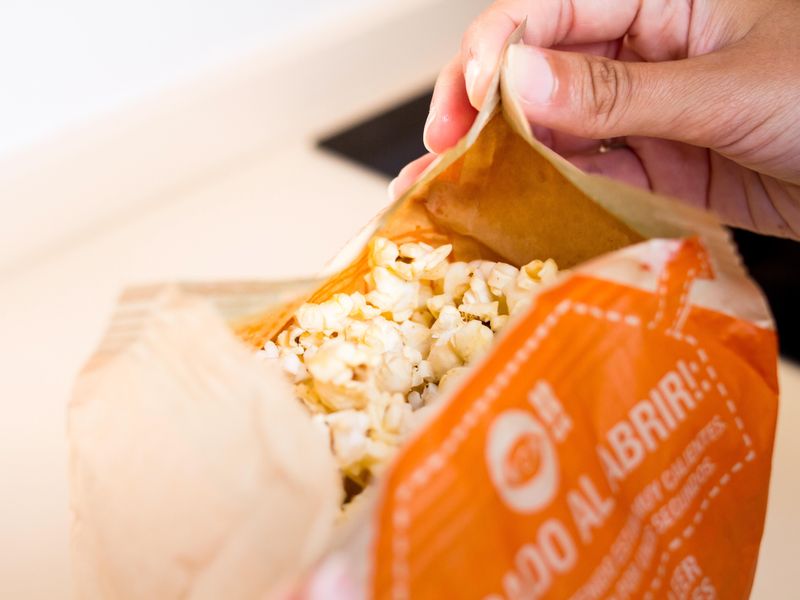 With PFAS in Packaging, How Safe Is Microwave Popcorn?

Munching handfuls of microwave popcorn might be perfect for movie night, but your snack could be loading your body with potentially harmful "forever chemicals," experts warn.

Many microwave popcorn bags are lined with PFAS (perfluoroalkyls and polyfluoroalkyl substances), and evidence has shown that these chemicals will leach into the snack during popping.

Studies have found "high levels of these compounds in the blood of people who ate microwave popcorn regularly, so it does get into the bloodstream," said Dr. David Heber, founding director of the UCLA Center for Human Nutrition.

PFAS compounds are called forever chemicals because they break down very slowly, accumulating both in the environment and within human bodies.

The chemicals are commonly found in drinking water supplies throughout the United States, and can be found in the blood of 97% of U.S. residents, the federal government estimates.

"There's been a lot of attention on drinking water, but food is also a major source of exposure and studies have shown that consuming microwave popcorn and fast food is correlated with higher PFAS levels in the body," said David Andrews, a senior scientist with the nonprofit Environmental Working Group.

PFAS chemicals originally were developed in the 1950s as part of the nonstick coating of pans, Heber said.

They've since been added to many consumer products, including cleaning solutions, waterproof makeup, firefighting foam and stain-resistant coatings for carpets and upholstery.

Microwave popcorn manufacturers add PFAS to the lining of the bags to keep the oil that pops the corn from soaking out, Andrews said.

"You know sometimes if you leave the popcorn in a lot longer, you'll end up with blackened kernels that have burned?" Heber said. "Well, that's hot enough to also burn the paper, so this protects the paper from starting a fire in the kitchen."

But during the popping process, PFAS leach into the popcorn, making the snack one of the most notorious means by which the chemicals enter human bodies, Andrews said.

"This is actually one of the first product types that the FDA did testing on" to check for the presence of PFAS, around 15 years ago, Andrews said.

A 2019 study found that people who regularly ate microwave popcorn tended to have significantly higher blood PFAS levels, based on a decade of data about the eating habits of more than 10,500 people gathered by the U.S. Centers for Disease Control and Prevention.

People who noshed popcorn daily had PFAS levels up to 63% higher than average, according to results published in the journal Environmental Health Perspectives.

Concern is mounting over the potential health effects of PFAS on humans. For example, PFAS chemicals appear to impact the immune system, "so they reduce the effectiveness of vaccines," Andrews said.

High levels of PFAS in the body have also been tied to increased cholesterol levels, small decreases in infant birth weights, changes in liver enzymes, preeclampsia in pregnant women, and an increased risk of kidney or testicular cancer, according to the U.S. Agency for Toxic Substances and Disease Registry.

It is possible for microwave popcorn bags to be made without PFAS or other such chemicals, Andrews said.

Andrews pointed to Denmark as an example. The nation's largest grocer, Coop Denmark, announced back in 2015 it would no longer sell microwave popcorn because of PFAS in the packaging.

But months later, microwave popcorn returned to Denmark's store shelves, thanks to new bags made from tougher paper.

"They just changed the way the actual paper was manufactured, to provide enough resistance to work as a microwave popcorn bag without chemical additives," Andrews said.

The most recent public testing found PFAS in most or all of the brands of microwave popcorn sold in the U.S., Andrews said.

The Consumer Brands Association, a food industry trade group, did not respond to a request for comment.

Until companies announce updated packaging, people worried about PFAS should either buy a hot air popper or pop their own popcorn on the stove, Heber and Andrews said.

"Just a pan or a pot with a little bit of oil on the stove will work," Andrews said. "That's how I do it all the time. It's an easy way to avoid the potential PFAS exposure."

The U.S. Centers for Disease Control and Prevention has more about PFAS exposure.