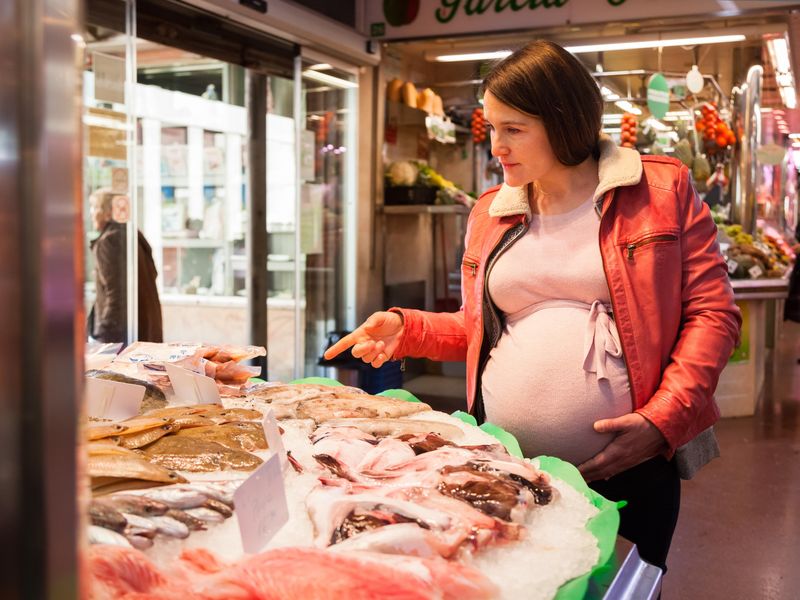 Seafood in Pregnancy: To Eat or Not to Eat?

Pregnant women hear a lot of “Do this” and “Don’t do that” advice about what is safe to eat.

But one recommendation that’s particularly important involves seafood: During pregnancy, women need to eat enough seafood to gain the health benefits, but not so much to raise the risk of some significant consequences. They also need to be careful about how the fish they eat is prepared.

"Fish is an important source of nutrients, and its consumption should not be avoided," said Dr. Vaia Lida Chatzi, an associate professor of preventive medicine at the Keck School of Medicine of the University of Southern California (USC), who led a study published in the journal JAMA Network Open.

"But pregnant women should stick to one to three servings of fish a week as recommended, and not eat more, because of the potential contamination of fish by mercury and other persistent organic pollutants," Chatzi advised.

The benefits of omega-3 fatty acids found in certain fish are notable. These nutrients are credited with a lot of health gains — during and outside of pregnancy.

The U.S. Food and Drug Administration notes that one of the nutrients found in fish, choline, supports development of the baby’s spinal cord and cognitive development.

In the USC study on the health benefits of fish in pregnancy, the researchers found that the children of mothers who ate fish one to three times weekly during pregnancy had better waist circumference, blood pressure and cholesterol levels, all markers of metabolic health. That research was done when the children were aged 6 to 12.

Conversely, a study that measured the long-chain fatty acids EPA and DHA in pregnant women’s blood concluded that those with the lowest levels during the first and second trimesters were 10 times more likely to have a preterm birth compared to those with the highest levels. EPA and DHA are commonly found in fish. That research was published in the journal EBioMedicine.

A lack of fatty acids in the diet may cause cellular stress to the placenta or mother, Dr. Kelle Moley, senior vice president and chief scientific officer for the March of Dimes, said when the study was published.

"We should probably be making sure that women have these fatty acids in early pregnancy and throughout pregnancy," Moley added.

How much seafood can pregnant people eat?

Among the nutrients in fish are omega-3 and omega-6 fats, iron, iodine, choline, protein, selenium and vitamins D and B12, according to the FDA.

The agency recommends that pregnant and breastfeeding women eat 8 to 12 ounces of safe fish varieties each week.

Seafood to avoid during pregnancy

Some fish are just too problematic for pregnant moms in any quantity because they can contain high levels of methylmercury, according to the FDA. Mercury passes through the placenta, according to the U.S. Centers for Disease Control and Prevention, and that can harm the baby.

Pregnant women should also avoid having more than one 6-ounce serving per week of certain fish, such as albacore tuna, because of its mercury content, according to the American College of Obstetricians and Gynecologists (ACOG).

If eating fish caught by friends or family, check for health advisories in those waterways or limit it to one serving of this and no other fish for the week, ACOG advised.

The FDA offers an exhaustive list of fish that are considered “best choices” during pregnancy, as well as those that are “good choices.” It recommends two to three servings from the best list or one from the good choices list weekly. A serving is 4 ounces.

Can you eat sushi when pregnant?

Foodsafety.gov lists sushi, sashimi and ceviche, as well as raw oysters, clams and scallops, as foods to be avoided by pregnant women because they may contain parasites or bacteria, including listeria, which has been linked to severe pregnancy complications.

All seafood should be cooked to 145° Fahrenheit, foodsafety.gov advises.

Use caution with smoked fish, too, also because of listeria risk, unless it’s cooked to 165° F, canned or shelf-stable.

Mayo Clinic offers some suggestions about knowing when fish is fully cooked: Fish should appear opaque and flaky; shellfish like scallops, shrimp and lobster should be milky white; and fish in shells that open, such as clams, should only be eaten once they’ve been cooked until open.