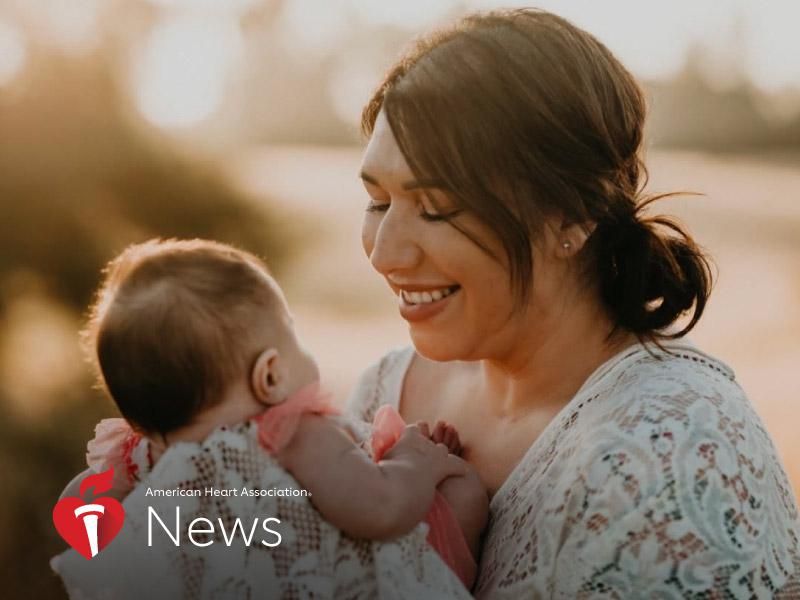 AHA News: Diagnosed With Preeclampsia Late in Pregnancy, She Had a Stroke 5 Days After Giving Birth

Always game for a new challenge, Andrea Engfer began running with a friend in her small town of Orting, Washington. She liked it so much, she signed up for a 5K. Then another -- and so on.

That competitive spirit served her well for the toughest challenge of her life: Recovering from a severe stroke five days after giving birth.

Andrea and her husband, Martin, were excited about the arrival of their first child last spring. The pregnancy was relatively uneventful until the last three weeks, when Andrea's blood pressure started to increase. She developed preeclampsia, a form of high blood pressure during pregnancy that affects the mother's liver and kidneys.

Her OB-GYN induced labor 12 days early. After two days of waiting for her daughter to arrive, Emma was delivered via cesarean section.

As typically happens with preeclampsia, Andrea's blood pressure went back to normal after she gave birth. Less than a week later, though, she woke up with a migraine. No matter what she tried, the headache worsened.

Worried, Martin drove her to urgent care. On the way, Andrea had the excruciating sensation that something burst in her head.

It's the last thing she remembers before losing consciousness.

The staff at urgent care took one look at Andrea and called 911. At the hospital, doctors determined she had suffered a hemorrhagic stroke and arranged to transfer her to another facility better equipped to treat cases like hers.

Before they loaded her into the ambulance, a doctor told Martin that most people in her condition don't survive. Andrea was 34 years old at the time.

Doctors at the better-equipped hospital were able to surgically repair the damage in her brain. She was left in a medically induced coma to help her body heal from the trauma of the stroke and the operation. After 12 days, she regained consciousness.

When Andrea arrived at a rehabilitation hospital in Seattle, she couldn't sit up by herself. Speaking was extremely difficult. She couldn't read or write and struggled to identify everyday objects such as an apple. Many times, she couldn't remember if she had given birth to a boy or a girl.

Tears flowed, for example, when Andrea's doctor told the couple that if she ever got pregnant again, she might face the same sort of complications.

While the couple had intended to have one child, Andrea struggled with the fact "it had been decided for me."

"That was hard to hear," she said.

As difficult as things seemed, Andrea knew from her 5K training that small steps could make a big difference.

For instance, in learning to read again, she sounded out each word. She progressed from words to sentences. Then to entire books. She made the same sort of progress with using her arms and legs, speaking and writing.

There have been some bumps along the way.

Almost exactly on the one-year anniversary of her stroke, a seizure left her unable to speak. It hardly helped that doctors had warned she was at higher risk for seizures until her brain healed fully.

"I was freaking out, but it was just a setback," she said. "I still have difficulty at times, but I've come so far."

Indeed, when Andrea heard about a virtual 5K sponsored by the American Heart Association, she convinced Martin they should sign up.

"We ran the entire thing," she said.

Martin marvels at Andrea's recovery, knowing that her competitive spirit will push her to continue erasing her limitations.

Determined to make something positive out of her experience, Andrea gladly shares her story on local radio and TV spots as an AHA ambassador.

"My story could help another person," she said. "I want people to know that there's hope out there."