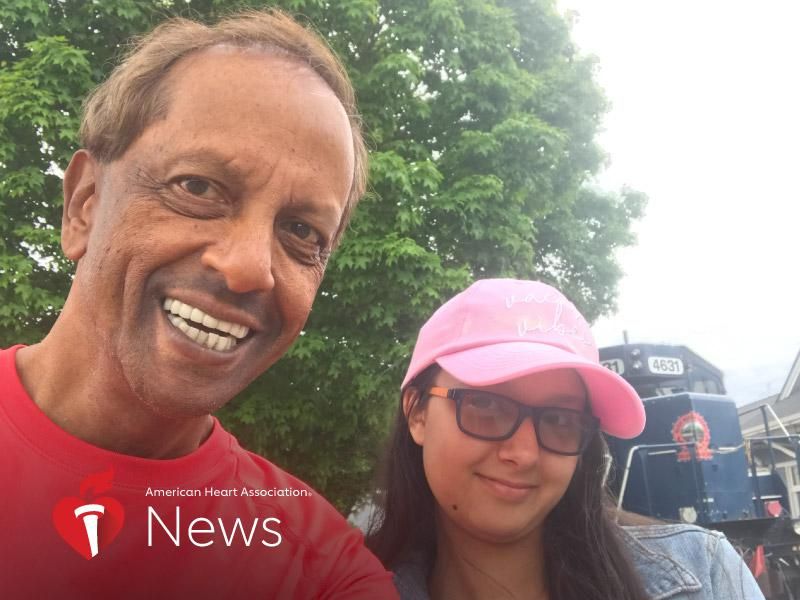 One balmy Wednesday evening, Kumar Seetharam devoured a slice of cheese pizza at his in-laws' house, then headed to a tennis court to hit balls with his 15-year-old daughter, Faith.

For Kumar, an avid tennis player, the exercise was a welcome break. The Florida resident was on a business trip in Ithaca, New York, and brought his family along.

But soon, he started feeling pressure and pain in his chest. Sweat dripped from his face and drenched his shirt. He chalked it up to the heat or muscle ache. He decided to head back to the house to cool off in the air conditioning.

His wife, Lisa, a nurse, checked his pulse. It was racing. She knew this level of sweating was unlike him.

"Something's going on," she said, "and you need to have it checked out."

In the emergency room, his vital signs and basic bloodwork looked normal. Doctors gave him medicine to slow his racing heart and kept him overnight for monitoring.

As the evening progressed and Kumar struggled to take a deep breath, tests revealed he'd had a heart attack on the court and had congestive heart failure. A nurse asked if he wanted to be resuscitated if his heart stopped.

"That was the scariest moment," said Kumar, who is 65. "It was the first sign that something really bad could happen to me."

Doctors conducted a cardiac catheterization to get a better look inside his arteries, and they planned to insert a stent to prop open a blockage. Instead, they discovered four major arteries in his heart were 90% blocked. He needed a quadruple bypass. The operation would have to be performed at another hospital.

An ambulance took Kumar to a hospital in Rochester, New York, about an hour and a half away. There, open-heart surgery redirected blood flow around his blocked arteries.

Kumar was determined to recuperate quickly -- and get back to the tennis court.

During his week in the hospital, he challenged himself to walk around his room for five-minute intervals. Then, he moved into a local hotel, cared for by Lisa and Faith. Many nights he slept in a chair because it was more comfortable than being in bed.

"There was very little I could do myself," Kumar said.

Yet he pushed himself. He trekked around the hotel room and lobby. Days later, the family returned to Lisa's parents' house in Ithaca.

At first, Kumar spent most of his time watching television in a lounge chair and shuffling from room to room. After a week, he felt strong enough to go out for short walks and to grab coffee at a local cafe.

"I recovered very quickly," he said, in part due to his previous lifestyle of exercise and a good diet. "I was lucky."

Still, the episode changed him. He was frightened and hyperfocused on his body.

"Some nights I would just lie there focused on my heart, wondering what might happen," he said. "What if my heart stops beating?"

To calm his anxiety, Kumar started practicing mindfulness and deep breathing. He counted his breaths, which refocused his attention on the moment and the positive things in his life.

In early October, the family flew home to Florida. Kumar kept walking, first around the house, then around his gated community. He built his stamina from five minutes to 30.

By December, he was hitting tennis balls with Faith and his brother, Ram.

"I was able to go to the back court and rally," he said. Now, three years later, he plays 30 minutes of tennis a day and walks for 30 minutes. He supplements with yoga, weightlifting and cardio dance classes with Faith.

He also cleaned up his diet. A vegetarian before his heart attack, Kumar went vegan, upping his intake of fruits and vegetables, lowering his salt intake, cutting back on fattier foods and eliminating white sugar altogether. He's since lowered his cholesterol.

"You do need discipline," he said, especially in social situations where junk food is a temptation.

It's easier to resist an ice cream cake when he pictures Faith. "I think, 'No, I want to live a little longer, not just for myself, but for my daughter.'"

Kumar still struggles with anxiety if his heart speeds up or he worries about having another heart attack. In those situations, he focuses again on his breath. He's also developed a closer connection to nature. That, too, helps calm him. Often, when driving, he'll stop to observe an interesting plant or animal; since his surgery, he's started a YouTube channel where he shares nature videos.

"I'm very grateful to be alive," he said. "I realized I've been given a second chance in life, and I enjoy every day. You have to be very positive. Never lose hope. You don't know what's going to happen tomorrow. Just live life to the fullest."