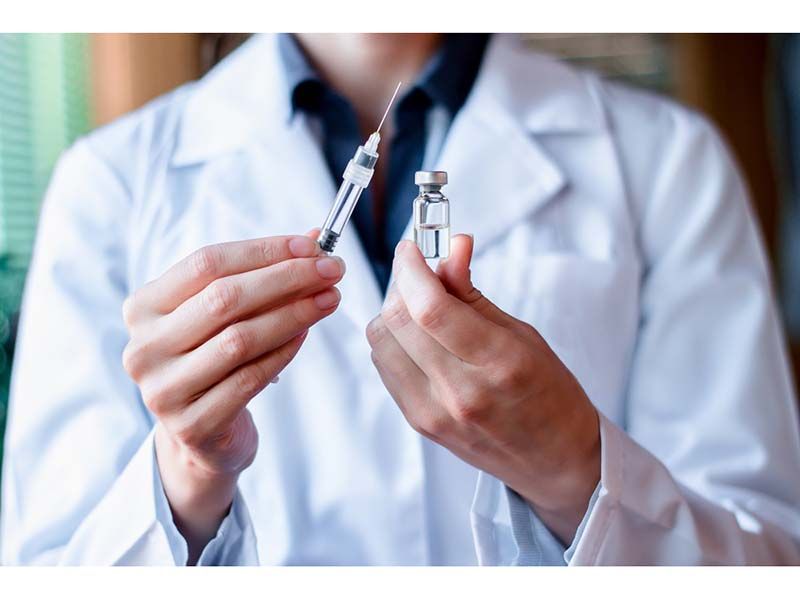 Health care workers were just as uneasy as everyone else when COVID-19 vaccines were about to be approved in the United States, with large numbers hesitant to take the shot in early December, a new study reveals.

But that hesitancy dwindled over the next few weeks, as health system employees learned more about the safety and efficacy data gathered during clinical trials of the vaccines, researchers report.

A survey of employees with Geisinger Health System in Pennsylvania revealed that only about 55% intended to get the COVID-19 jab when it became available.

That number grew steadily throughout the month, however, as high-profile vaccine-related events spread word of the vaccine's safety and effectiveness, survey results showed.

"Once you talk about how much data we actually gathered, and how much information we have about safety and efficacy, it makes people feel more confident about that vaccine, and much more willing to receive that vaccine," said Terri Rebmann, a professor of epidemiology and biostatistics at the Saint Louis University College for Public Health & Social Justice.

By late December, well over 80% of employees said they did intend to get the COVID-19 vaccination, the researchers reported. About 67% have received at least one dose as of Feb. 18, 2021, said the team led by Michelle Meyer, of the Center for Translational Bioethics and Health Care Policy at Geisinger.

The findings were published online March 23 in JAMA Network Open.

The experience at Geisinger is very similar to that at Vanderbilt University Medical Center, said Dr. William Schaffner, a professor of infectious diseases at the Nashville-based hospital.

"They have documented once again that health care workers are people, just like everybody else," Schaffner said of the new study. "They have the same concerns, the same hesitancy, they approach things very similarly -- this despite the fact that our medical center had been taking care of oodles of these COVID patients that were severely ill and we had developed a certain amount of pride in how well we were doing in caring for them."

The Geisinger surveys revealed that the top reasons for vaccine hesitancy were:

"On first blush, the first issues that were being brought up [at Vanderbilt] mirrored exactly what was in the [Geisinger] paper," Schaffner said. "People were concerned about the risks of the vaccine, they had safety issues, and many of them wanted to wait to see how this rollout of the vaccine would work."

The speed at which the COVID-19 vaccines were developed, tested and approved was revolutionary and breathtaking, but it also gave many people pause, Schaffner said.

"The very name, Operation Warp Speed, made people wary. It did not reassure them or give them a sense of triumph," Schaffner said.

Two sets of Vanderbilt employees in particular were very reluctant to get the vaccine, Schaffner said: Members of ethnic minorities, and young women concerned about the effects of the vaccine on their reproductive health.

To convince folks the vaccine is safe, Vanderbilt recruited people from those very segments of the hospital's population to perform outreach, for example, asking Black faculty members to argue on the vaccine's behalf to other members of their community.

"We had to get our women faculty, particularly those in maternal and fetal medicine, to do videos and to do face-to-face Q&As, and we've begun to be successful in bringing those folks in," Schaffner said. "There are a lot of young women in the reproductive years who are health care workers. This was not a trivial group."

Bringing in role models to speak to specific vaccine-hesitant groups could help sell the COVID-19 shot among members of the wider public, Rebmann said.

"Then you're more likely to see vaccine uptake in those individuals, when they see that their [role models] were willing to receive the vaccine," she added, noting that either medical experts or leaders from those groups could help spread the word.

Other groups have also become more confident regarding the COVID-19 vaccines.

The National Center for Assisted Living just announced that between December and March, willingness of long-term care staff to get the vaccine increased by 94%, while plans to decline the shot decreased by 41%. More than three in five care staffers are now willing to take the jab.

Vanderbilt Medical Center now has more than 80% of its personnel vaccinated, thanks to these efforts, Schaffner said.

"When you bring something new in -- new virus, first time in human populations, rapid development of a vaccine with new technologies -- you're going to have a lot of people who are very sensibly asking questions," Schaffner said. "But they can be reached. They can be informed. And even more important than informed, they can be comforted and reassured."

The U.S. Centers for Disease Control and Prevention has more about COVID-19 vaccines.